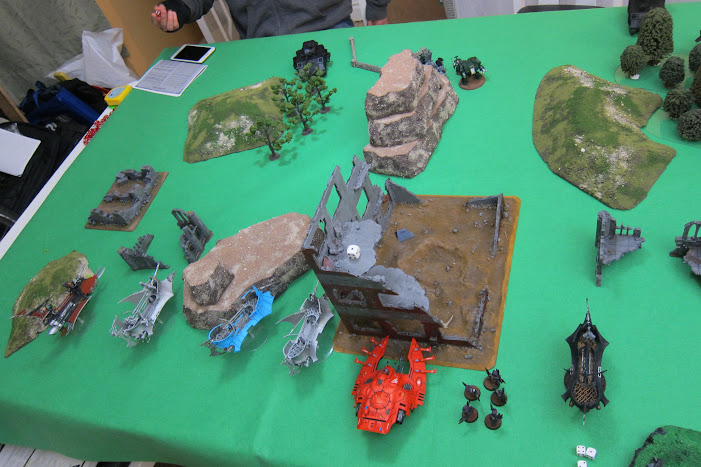 (Jack actually wrote this batrep, with a little help from Frank)

We roll off get a pitched battle deployment and we are playing Purge the Alien (kill points). Dark Eldar will deploy first and take the first turn. Frank spreads his raiders across the board, hoping to keep his options nice and open in the first few turns (the Archon is riding in the blue raider in the center of the shot.

Eldar War Walkers wait in reserve, hoping to use their Scout/Outflank to take out a few troops: 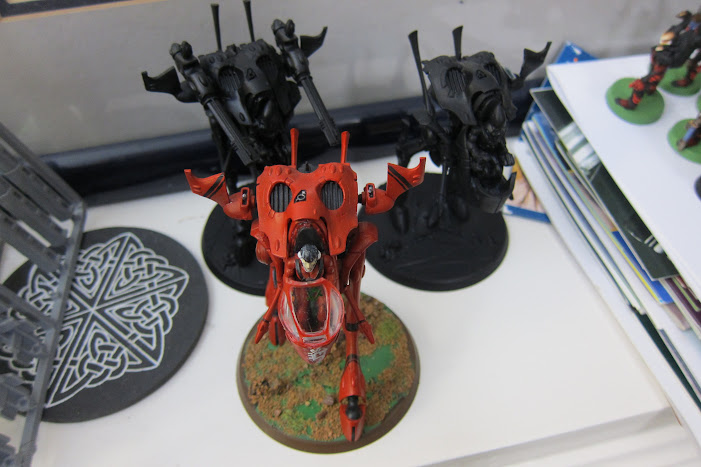 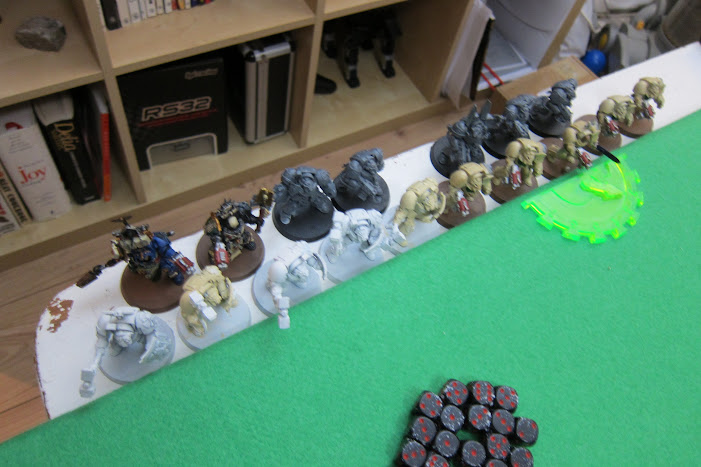 Dark Angels are mostly off board to start with (see above), as the 3 terminator squads are deep-striking. Only the vehicles and the blood angels (which skulk behind the large hill in the middle of the Space Marine deployment zone. 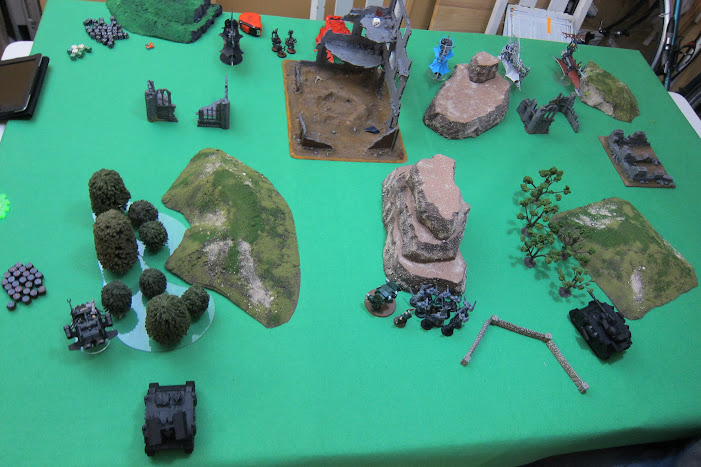 Lastly, the pathfinders make the scout deployment via infiltrate and lurk on the back of the central hill. 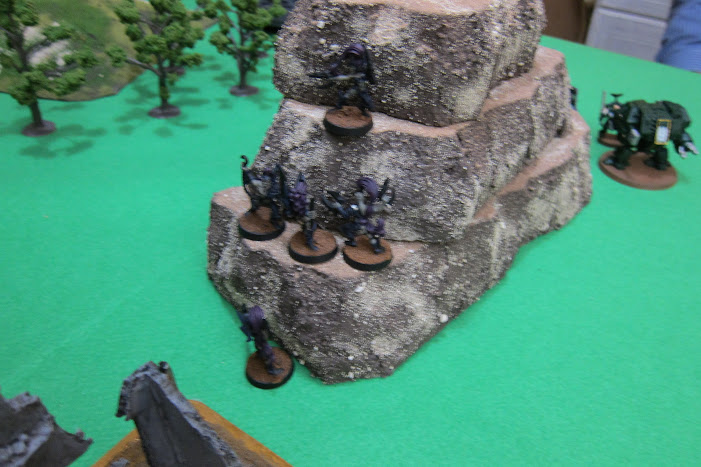 The Angels fail to steal initiative, and so Frank takes the first turn. 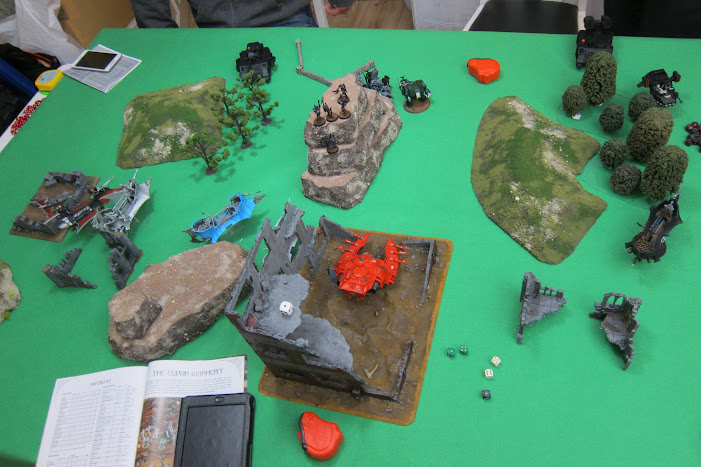 The raiders all sweep forward, with the wave serpent passing its difficult terrain check to fly through the large ruined building. It as the start of the shooting phase that I remind Frank raiders being fast don’t have to snap fire their dark lances if they move 12”. This is great news for Frank who proceeds to score 2 penetrating hits against the Dark Angels tanks, but fails to do much other than shake the predator and immobilize the whirlwind. 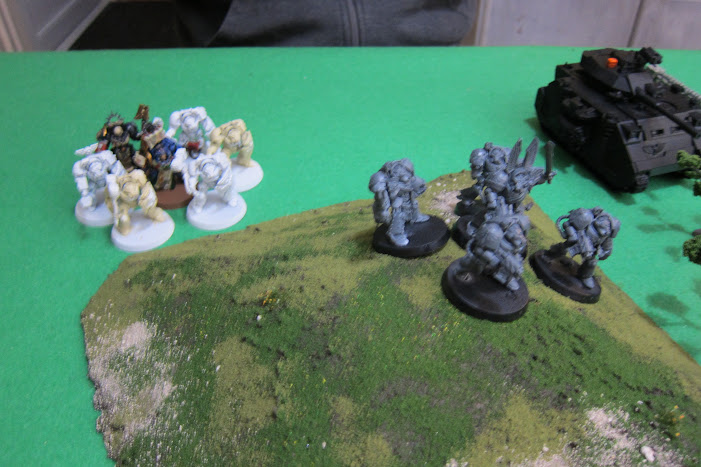 The Space marine turn begins with the Deathwing deep-striking in on the large hill to the right of the space marine deployment zone.

The Whirlwind fires and misses, and the land speeder glances the raider on Franks right flank.

Mephiston and the blood angels bomb forward, and melta the Archon’s raider from under him, killing a few incubi in the process. 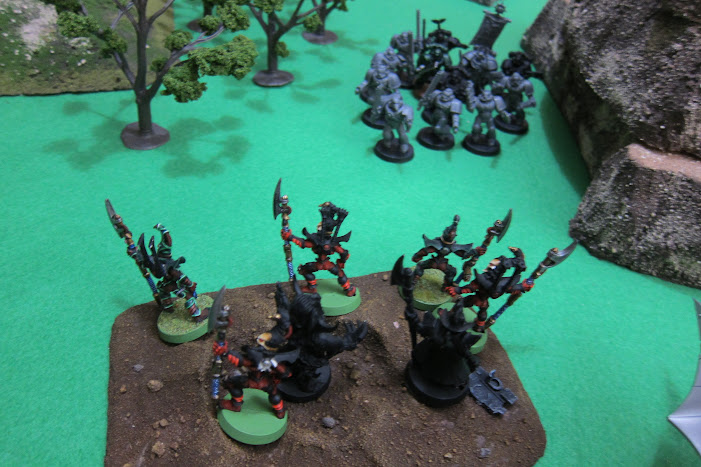 The predator takes out another raider, and its wyches duly disembark. 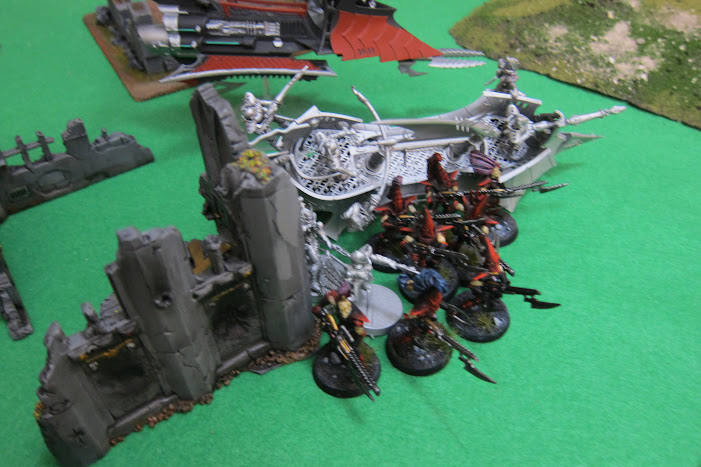 Assault phase and the blood angels charge in, though the elder trickery (defensive grenades!) stop them getting any bonus attacks. 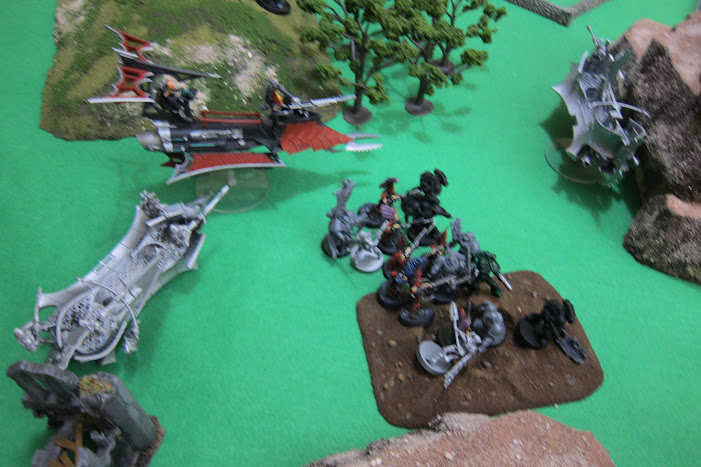 Mephiston challenges the dark elder and the Archon, hiding behind his pesky +2 invulnerable save nobly accepts. Mephiston then proceeds to smash him to bits, the Archon fails his first save and is insta-killed! The incubi lose a few more but hold their ground.

Frank rolls for reserves and the warwalkers come on, marching in from the Eldar left flank and popping several of the deep-striking terminators with their colossal amount of shots. The surviving raiders scoot forward a little more but fail to do much to the dreadnought. 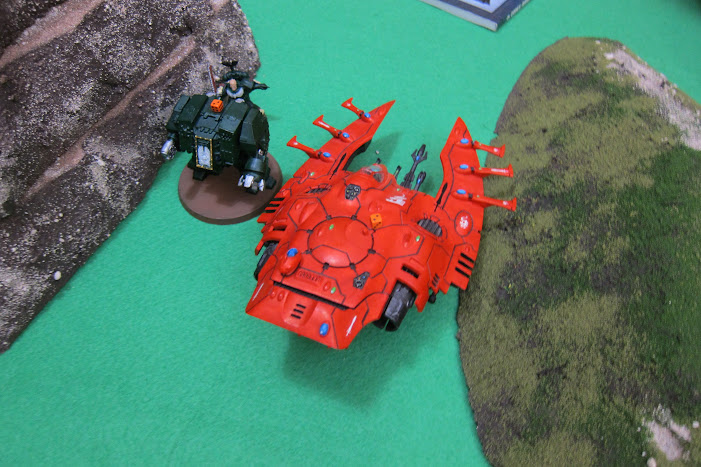 The wave serpent advances through the middle, firing on the Dreadnought, but the dire avengers are distracted and forget to disembark! The pathfinders fire at the assault marines, but fail to roll a 6 to choose their target, and kill just a single marine.

The space marines turn 2 begins with a failed reserve roll for the last terminator squad… but the rest of the turn was more satisfactory.  The land speeder zipped forward and scored another hull point off the far right raider, but failed to penetrate it (which was to prove costly next turn). The Whirlwind failed again, scattering way off.

The blood angels mauled their way through more incubi, losing a few but still doing the damage, the incubi did hold though. Another raider fell to the predator in the centre, and the wyches were forced to disembark. 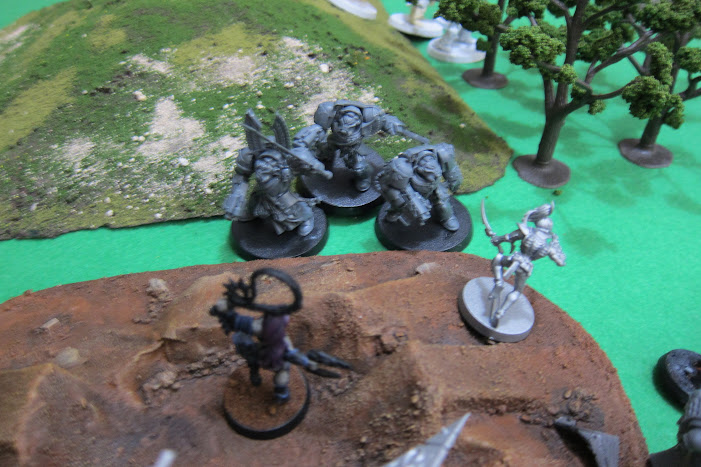 Meanwhile the terminators advanced down their right flank, shooting and knocking out the red/black raider, killing half of the Wyches, before charging into them. 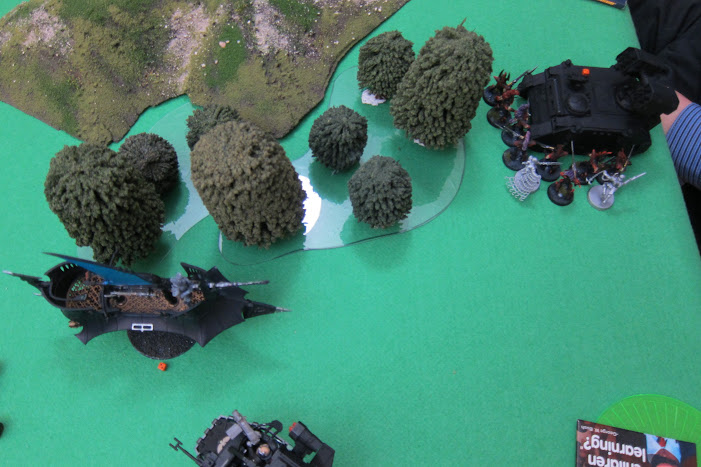 The game was starting to look a bit inevitable at this point, the kill points were mounting up against the Dark Eldar, who I think were being unfairly punished for having taken raiders. Frank battled on nobly, the Wyches on the right scoring his first kill point as they abandoned their damaged raider and charged forward, tearing the Whirlwind to pieces with haywire grenades. The War Walkers took out 2 more Terminators, but since they are Fearless there was no morale roll to make. 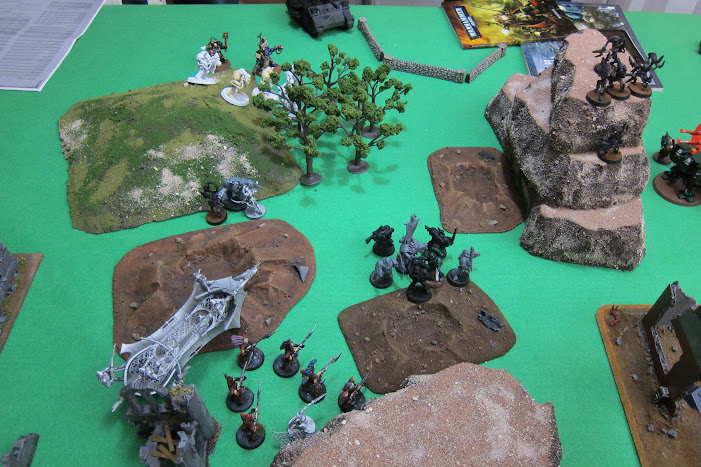 The Incubi were eventually butchered, and the blood angels continued their rampage into the next squad of Wyches. The War Walkers popped a few more Terminators, but the remainder of the Deathwing charged forward and wiped out the last of the Wyches on the left flank.

The final sub-plot of note was the dreadnought rather fluffing his lines against the stationary wave serpent in the middle of the field. 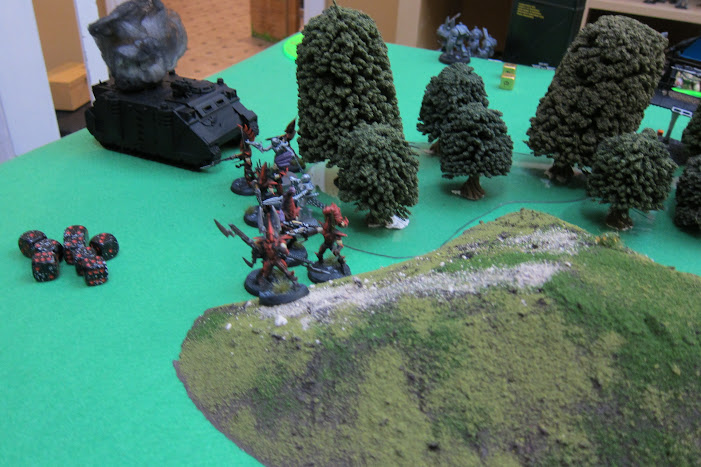 Carrying on their attack after successfully taking out the Whirlwind, the last intact Wych unit pressed on, intent on taking out the Dreadnought, which they were able to do on Turn 4. The Dreadnought exploded, killing a few of the Wyches but not harming Brother Corbulo. 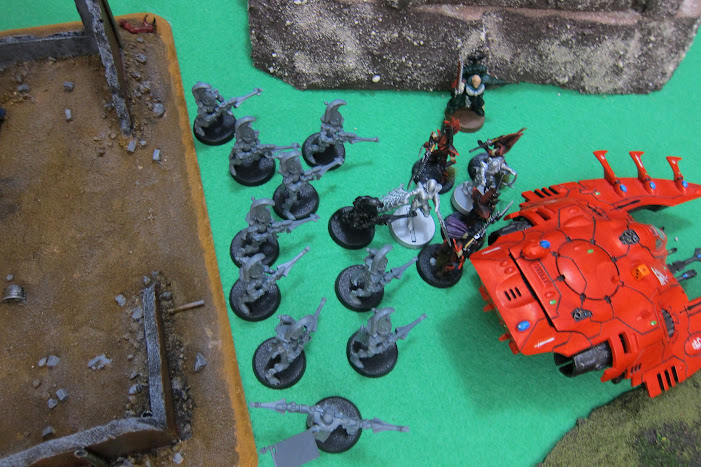 Eventually the Dire Avengers remembered to disembark, and the eldar jumped out and fired their 20-odd shots into Brother Corbulo (masquerading as a Dark Angel sergeant in the shot above), who withstood all their firepower with not a scratch on him, thanks to his insane Feel No Pain rolls! (The Farseer probably proved a bit costly points-wise as he spent most of the game embarked, forgetting to reroll misses for the Wave Serpent, plus Mephiston kept making his psychic rolls, taking only 1 wound from about 9 psyker checks).

And with that the game was over… the Space Marine alliance winning 13 points to 2.

Very pleased with my strategy of no troop choices and no transports, which proved invaluable for kill points as it meant there was nothing easy for Frank to knock off the board. In reality, I can claim very little credit for this victory other than proving a distraction. The absolute star of the show was Shane’s Blood Angels, who tore a bloody streak across the battlefield and killed the wretched Archon very early on, halting him before he could do any damage.

Man of the match – Mephiston (even though he isn’t in my army!)