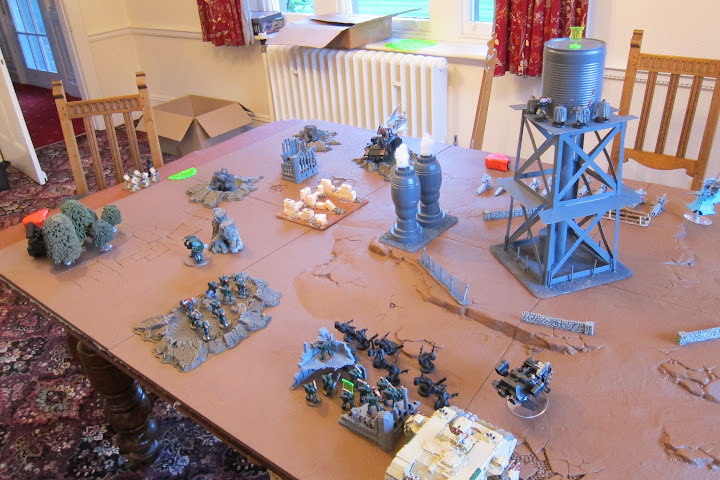 Once again, we took pictures at the end of nearly every turn to make it easy

The Archon surveyed the decaying imperium wasteland before him with a wicked smile. “What we seek lies in these ruins somewhere.” He spoke more into the air than to the towering figure stood next to him.
“I seek only skulls, Vexurius,” thundered the towering Chaos Lord next to him. 7 foot of power-armoured viciousness.
The Archon sighed, ” And you will have them Lord Trolblad, once I have the Eye…”
“Skulls for the throne of the blood God…” Lord Trolblad roared again, gloved hand gripping his axe as if he was a hair’s breadth from cleaving the Dark Eldar in two where he stood. “Where are the imperium scum?”
Vexurius’ smile returned, “Soon my friend, soon they will be here“. 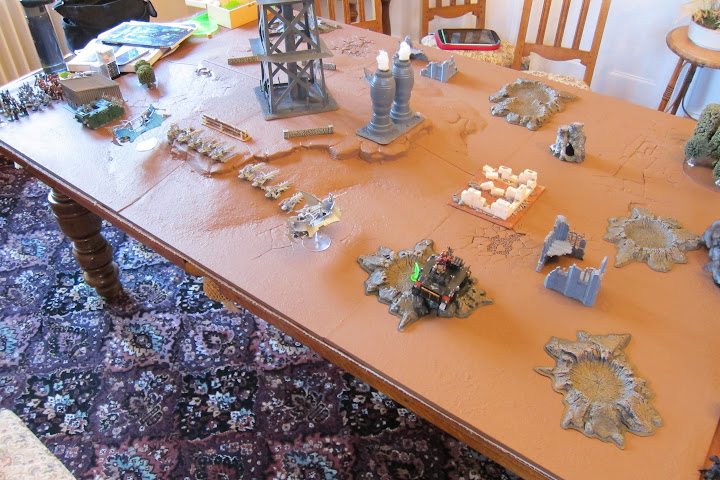 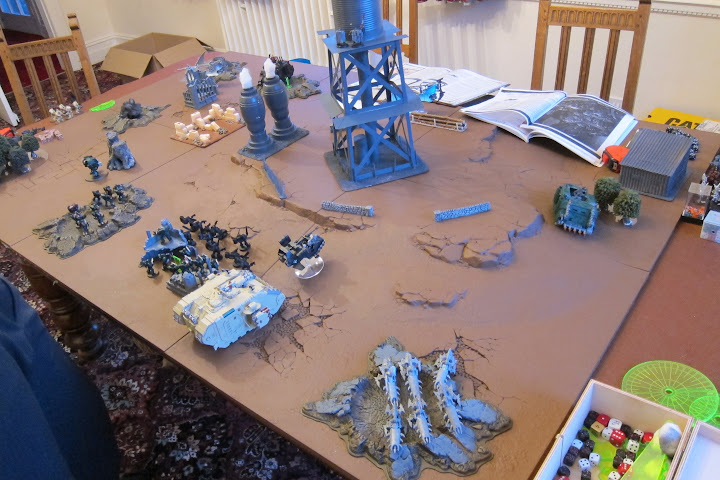 DARK ELDAR/CHAOS TURN 1: Dark Eldar Reavers have attacked the Snipers on the water tower, killing three. The green Chaos Rhino on the right has moved forward, attempting to skirt around the hill to move the Khorne Berzerkers into position to attack…?…not sure! The silver Raider on the left in the distance has moved forward behind ruins and missed its shot on the Whirlwind. The blue command Raider missed its shot on the Dreadnought (both Raider shots were snap shots). 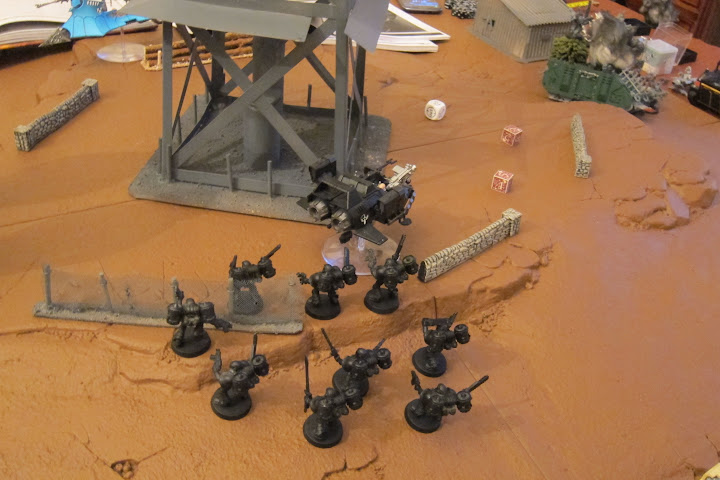 DARK ANGEL TURN 1: The Land Speeder moves up and wrecks the Chaos Rhino by unloading all its weapons into it, and the Assault Marines move up behind. The Khorne Berzkers must disembark, so they hide behind the dead Rhino for cover. 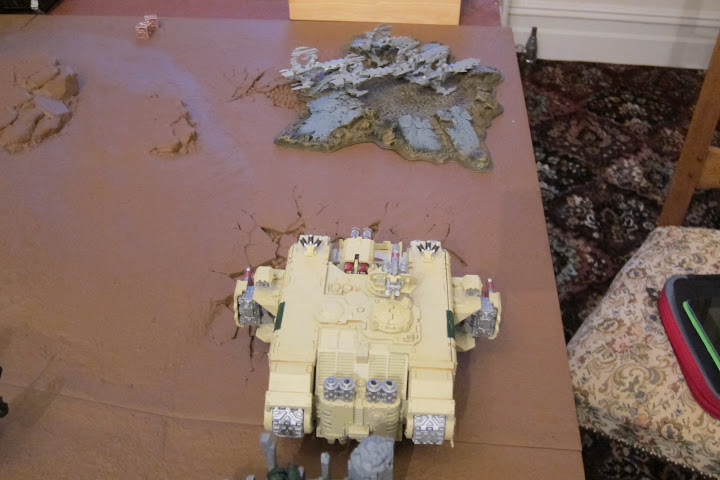 DARK ANGEL TURN 1: The Crusader unloads all of its weaponry into the Reaver squad but only manages to kill one – yay jink saves! 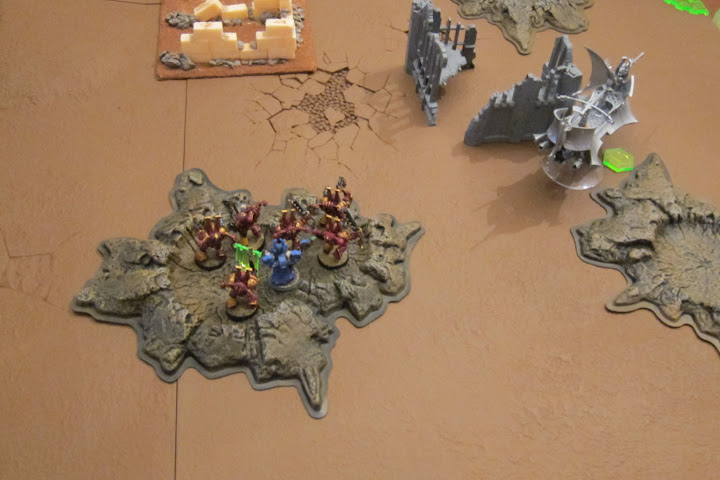 DARK ANGEL TURN 1: The tactical squads and Whirlwind manage to explode the other Chaos Rhino, killing 3 Khorne Berzerkers, and the Dreadnought stunned the crew of the Raider full of Wyches, immobilizing it for a turn. 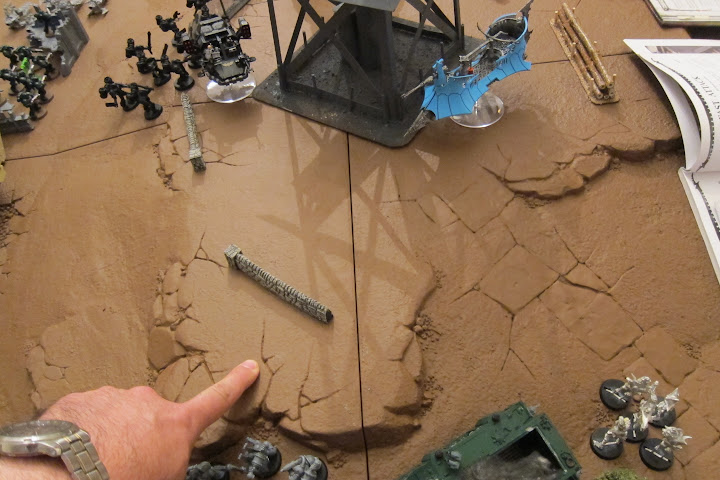 DARK ELDAR/CHAOS TURN 2: Reserves come in! The Scourges attempt to Deep Strike just within range to hit the Crusader, but miss terribly, landing 11″ inches away. Just as a reminder the maximum distance you can miss by is 12″. The Haywire Blaster is fired at the Land Speeder, and will glance on anything but a 1, will penetrate on a hit, and the roll is a 1… The HQ Raider missed the Crusader 😦 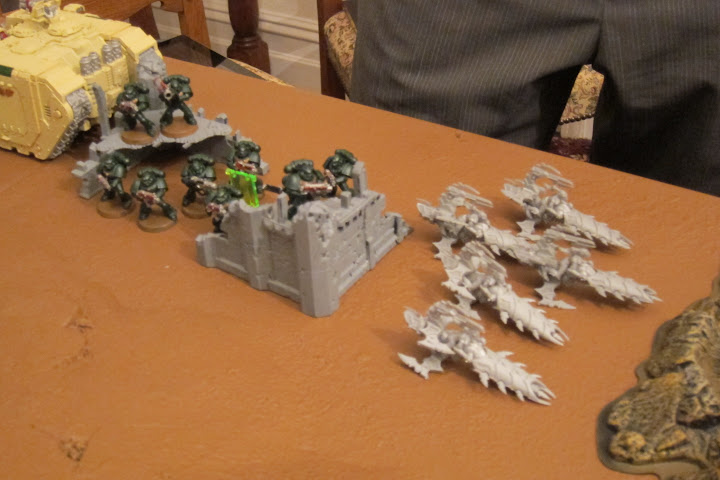 DARK ELDAR/CHAOS TURN 2: Reavers fly over the Crusader and attempt another bladevane attack on the encamped tactical marines, but do no damage, placing them right in between two squads of marines. 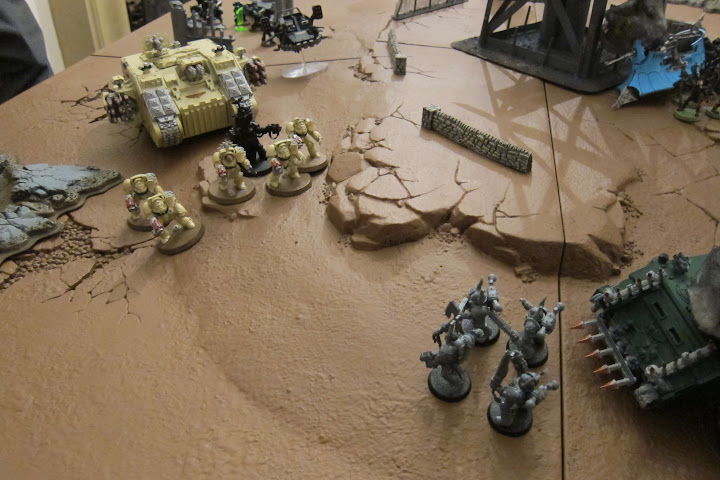 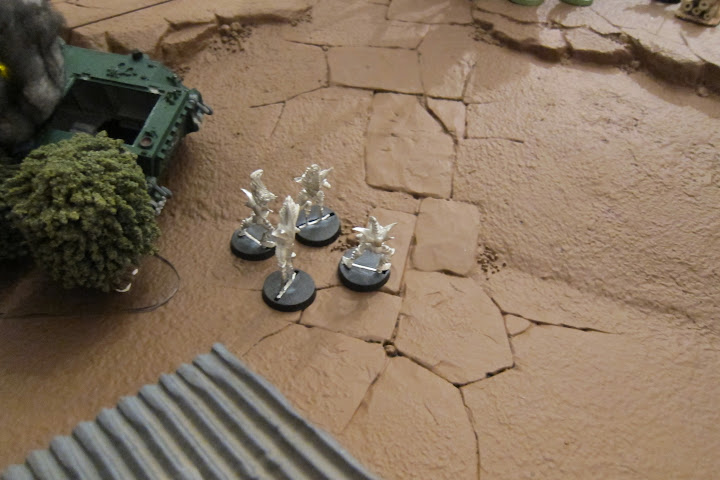 DARK ANGEL TURN 2: The Snipers fire on the Scourges, rolling TWO SIXES, meaning they can choose exactly who they hit, so of course they take out the model with the Haywire Blaster. 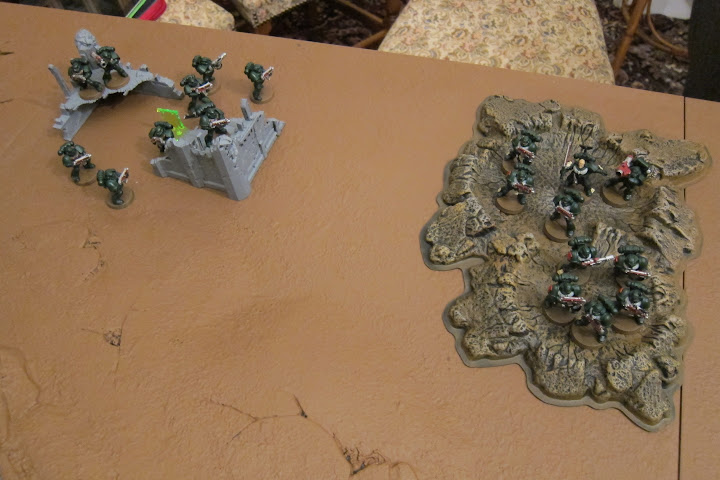 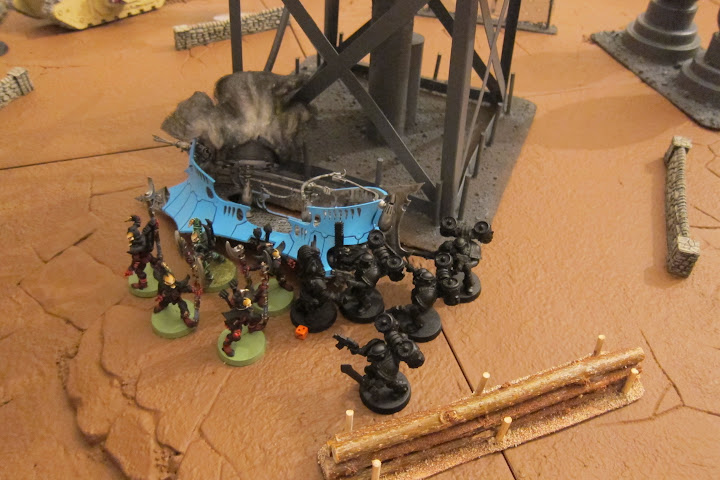 DARK ANGEL TURN 2: The Land Speeder takes out the blue Raider with the Archon and Incubi, forcing them to disembark. They are just out of range of the Whirlwind (whew!) but the Assault Marines are just around the corner, and move to close combat. The Archon can’t see them to take a snap shot, but kills 3 with his Agonizer on the first turn of combat, then the marines kill the Klaivex and an Incubi. The Incubi can’t move in because they are too far away (they’d spread out quite a bit to avoid the Whirlwind’s blast template). 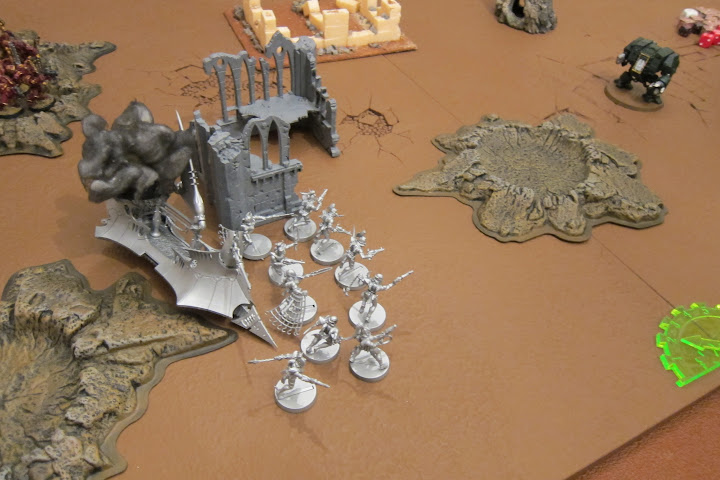 DARK ANGEL TURN 2: The Wyches had to disembark after the Dreadnought and the Whirlwind took out their Raider, they are preparing to move forward and hopefully reach the Dreadnought just past the crater. 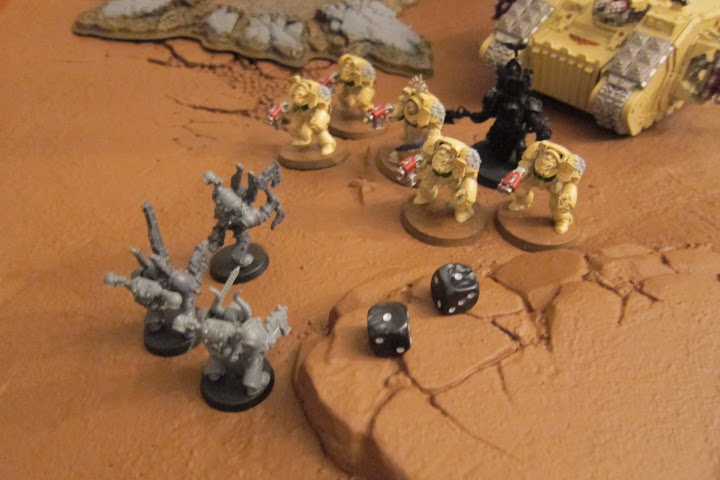 DARK ELDAR/CHAOS TURN 3: The Scourges moved to fire on the Terminators and did no damage, then the Khorne Berzerkers declare charge, actually get hit by the overwatch, one dies…and then they roll a 2 for the charge distance. Unbelievable. 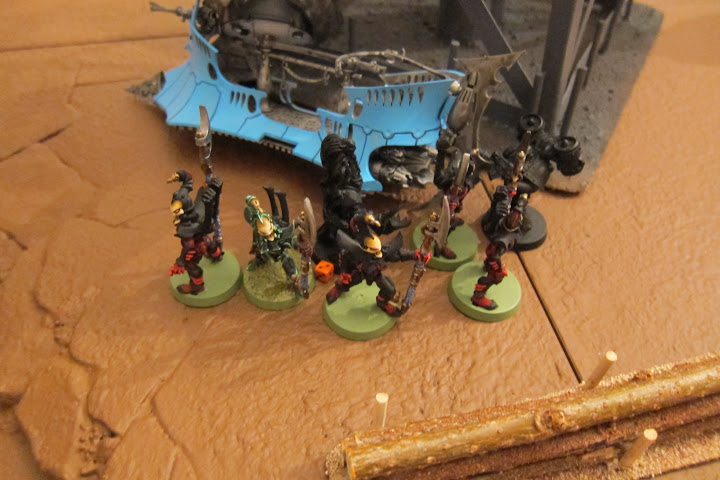 DARK ELDAR/CHAOS TURN 3: The Archon/Incubi squad has taken the Assault Marines down to just 1 model. 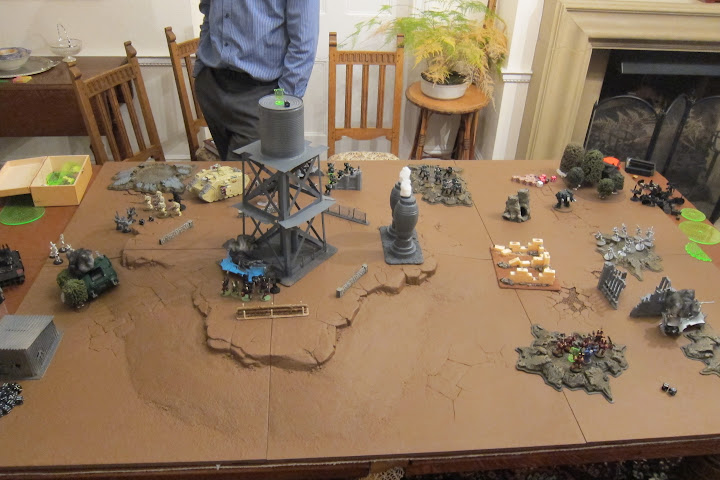 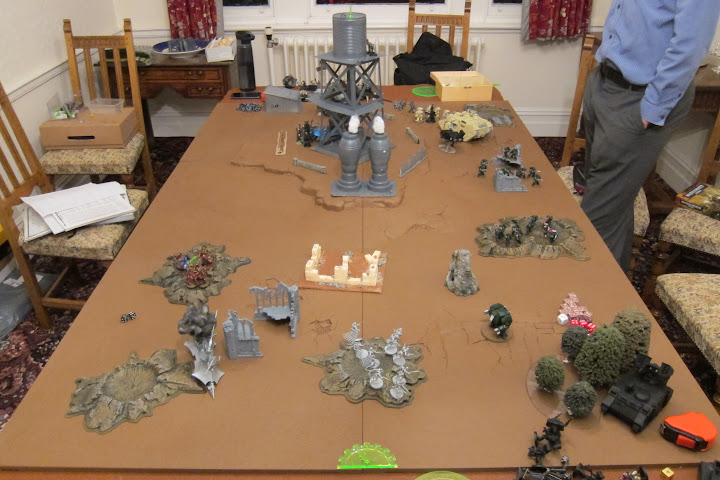 Another view of the battlefield. 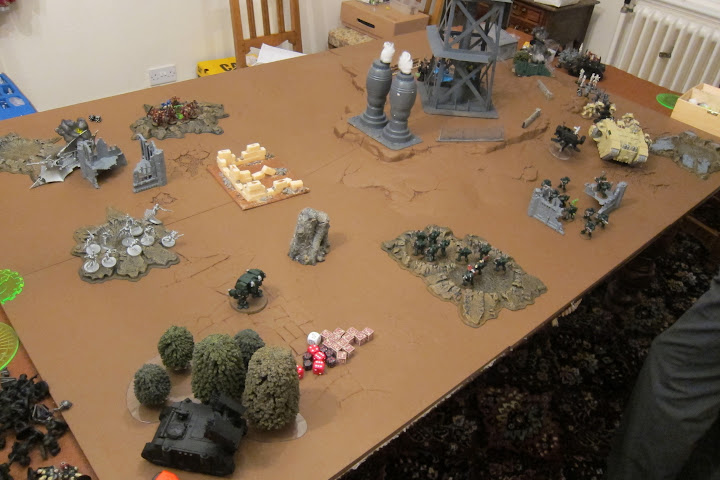 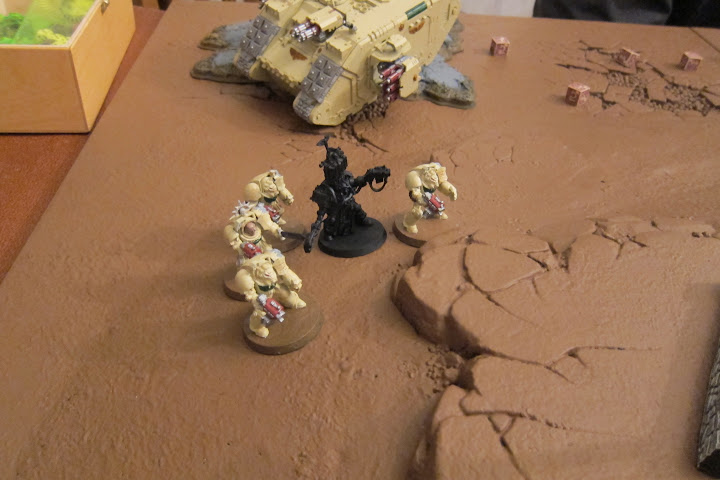 DARK ANGEL TURN 3: The Crusader wipes out the Scourges and the Terminators kill the remaining Khorne Berzerkers with a loss of one of their own, so the Terminators prepare to move on.

The great steel behemoth tore across the dusty wasteland, eager to meet its prey. Inside the passengers stood braced, 6 giants of men in Terminator armour; a tonne of metal, guns and experienced warrior.
Brother Kalenth regarded his battle brethern; resplendent in the famed bone armour of the deathwing. Each one knew his duty and would die purging this world of the traitors and the xenos. Kalenth regarded his own equipment, his storm bolter that had slain a thousand foes before, his sacred text – chronicling the glory of the immortal Emperor, latent psychic power rippled up and down his mighty force sword. He was ready.
The Land Raider ground to a halt. With a roar the air ignited as a hundred bullets ripped across the landscape in seconds. The front door opened and the Terminators strode purposefully out, bolters sounding a chorus of hellish fury, and Dark Angels saw for the first time the devestation before them. Several of the Khorne madmen lay dead already, and the Terminators threw themselves at the remainder with practiced ease. The land would be stained red tonight…. 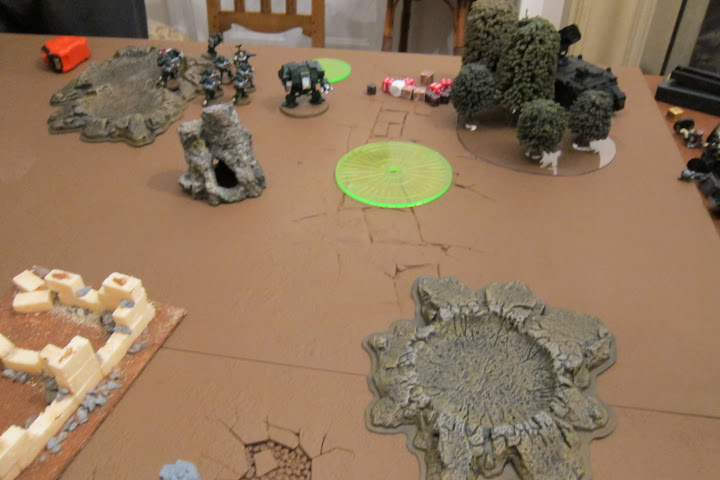 DARK ANGEL TURN 3: The Whirlwind takes out 7 of the Wyches, then the tactical Marines finish the job. Land Speeder does no damage to the encamped Khorne Berzerkers. 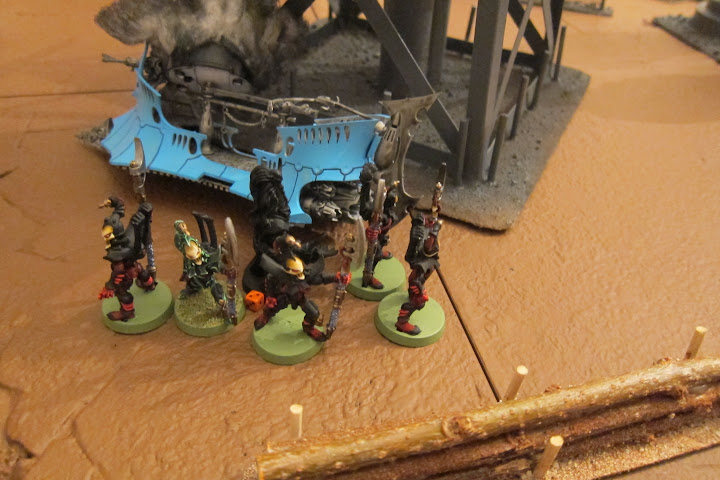 DARK ANGEL TURN 3: The Archon finishes the job with the Assault Marines! 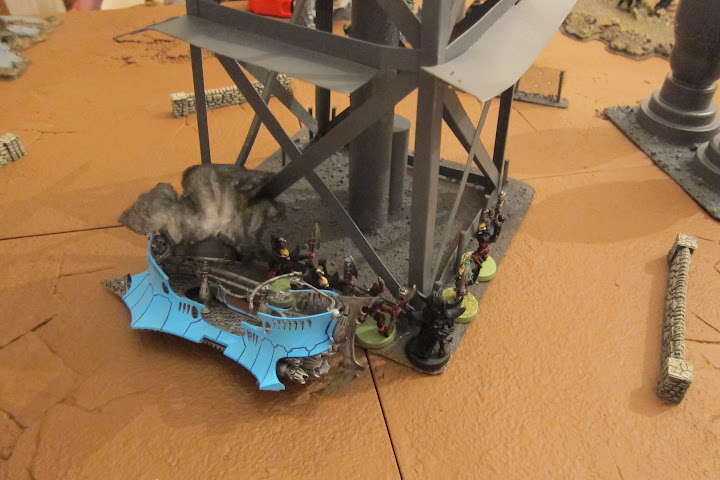 DARK ELDAR/CHAOS TURN 4: The Archon and his Incubi move to the base of the tower to attempt a climb, but have to wait until next turn to try. 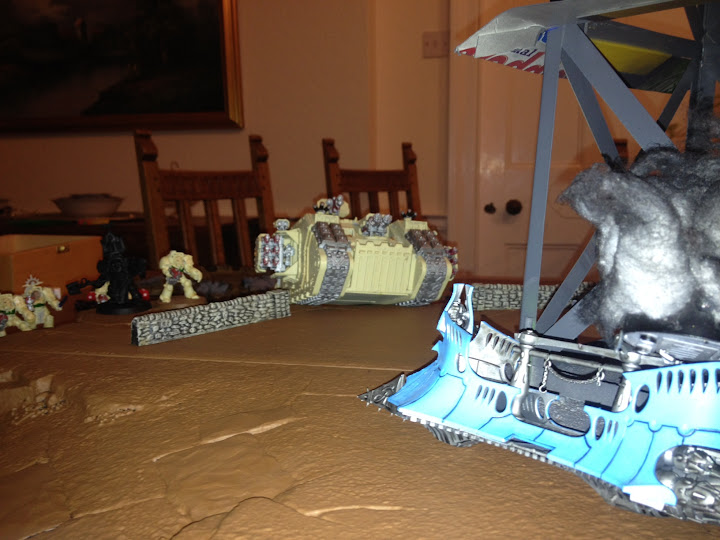 DARK ANGEL TURN 4: the Terminators and the Crusader move up, firing on the Archon and his squad, wiping them out, and four of the Khorne Berzerkers occupying their objective are killed.

At the start of Turn 5, Night Fighting starts but it’s determined that it’s getting late and the game is called. No chance for Dark Eldar and Chaos to tie or win (last chance to tie was with the Archon and Incubi to climb the tower), so the Dark Angels win again.

Brother Kalenth checked over the metallic archeotech with great care, the intricate metalwork could only hint at the latent energies within. He stowed it upon his person and looked up. Many of his brothers had died this day to secure the Eye. Many more traitors lay dead, so too the blackened bodies of the sinister Dark Eldar. Kalenth frowned in thought at what evil pact had brought these two groups together. No matter, the world would be rid of their taint, and their deeds noted in the bowels of the rock for the masters to consider.
…
Chaos Lord Svarlf Trolblad turned before he crested the ridge and surveyed the smoking ruins on the battlefield before continuing his retreat. He didn’t care about the Dark Eldar that lay dead, or about Vexurius Grazhar, the dead archon, or the ancient piece of tech he had craved. Lord Trolblad cared only that he lost more than half his command that he’d taken to battle in this ill-conceived alliance with the devious Dark Eldar. This would certainly lead to him losing standing amongst his commanders, which would mean he must think of further machinations to stem further loss of face.

THOUGHTS ON THE BATTLE from Frank: Did merely *okay* in this battle, but I would have chosen a much different list if I hadn’t been lazy and had actually considered the mission. I would have probably not taken the Chaos Marines and used Kabalite Troopers to hold my ‘home’ objective (much cheaper, but they might have died quicker) and used more Raiders full of Wyches to move up fast, and left the Reavers out of the army entirely. They at least had two rounds of action this time, but they did do a good job against the Snipers on the tower. Not a great spend of 150 points. In hindsight, I should have attacked the Snipers again with the Reavers to hopefully take them completely out, then tried to move on the tactical squads. And once again I should have moved the Raider full of Wyches 18″ instead of just 12″, to at least give them a chance against the Whirlwind and Dreadnought. The other thing I shouldn’t have done was move the Chaos Rhino into basically a frontal attack on the Crusader/Terminators – I should have gone the other way around the tower to engage the tactical marines, most of whom would probably have fallen to the Berzerkers, and force the Crusader to maneuver around its own men to move forward.

My Man of the Match was again the Archon, taking out probably 6 or 7 Assault Marines all on his own.

RULES WE MISSED/GOT WRONG: The Archon and Incubi had a Pain Point after killing all the Assault Marines, this would have given them Feel No Pain, so they might have survived into Turn 5. But even with night fighting they would probably have been wiped out after the next Dark Angel turn, so there was just a slim chance of a tie.

Any comments from Jack are welcome!